WAN Failover works in conjunction with multiple ISPs to assure that you maintain Internet connectivity if a loss of connectivity occurs on one of your WAN connections. If one of your ISP links goes down, WAN Failover will automatically route all traffic over the other WAN(s) until service is restored.

You may also consider using WAN Balancer in your network as well - it allows you to maintain an automatic distribution of traffic over multiple WAN links rather than just failing over if one goes down.

This section reviews the different settings and configuration options available for WAN Failover.

The Status tab presents an overview of the WANs and the current test results. 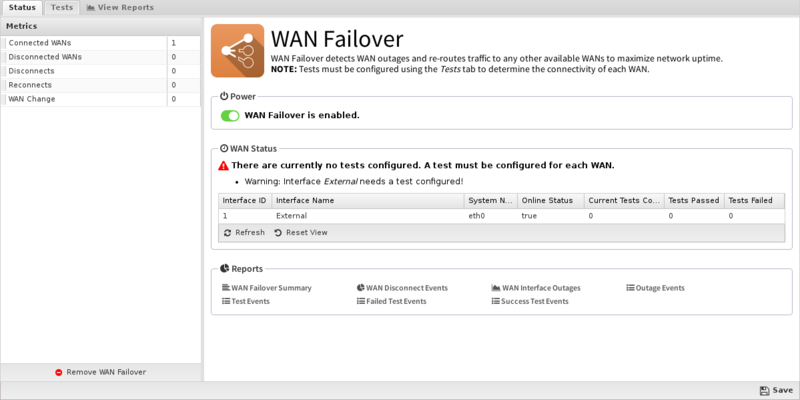 WAN Failover must have tests set up for every WAN interface; these tests are set up on the Tests tab. Just click Add, select your interface and test type, then run the test - if it passes, go ahead and save it.

Tests is how WAN Failover determines if the given WAN interface is up or down so it is important to pick tests carefully that correlate with the status of that WAN connection. For example, pinging an ISP router is generally a good test because it will usually fail when the ISP is down but work when connectivity is good. Pinging a public site like google.com may work, but may sometimes have false positives or false negatives. Pinging the gateway may also work, but may sometimes provide false positives when the gateway is reachable but the ISP itself is offline.

The options are as follows: 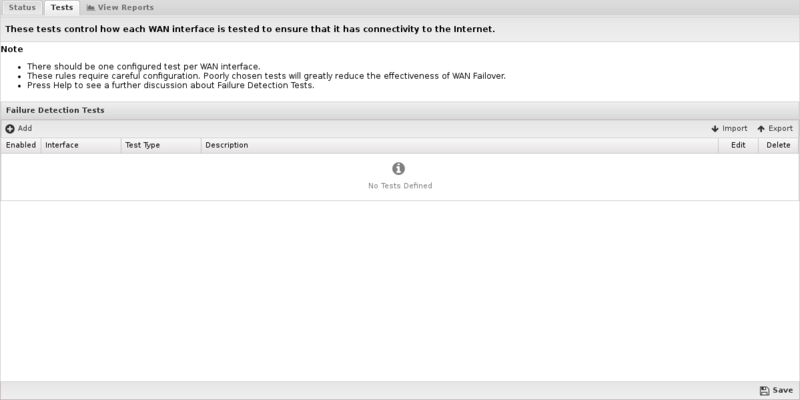 The Reports tab provides a view of all reports and events for all traffic handled by WAN Failover.

I installed and configured WAN Failover, but nothing is happening. What should I do?

Make sure each ISP's interface has is WAN Interface? checked at Config > Networking > Interfaces and has all of the required information properly entered. You'll also need to verify WAN Failover has tests set up for each WAN connection. If you're only using WAN Failover, you'll need to disconnect your primary WAN to get traffic to flow over the secondary. If you're using WAN Balancer, make sure your weights are set properly.

What tests should I use for Failover?

This is really up to you. NG Firewall provides four test methods - in each case, it sends out data packets and decides if the WAN is up or down depending on your specified Testing, Timeout and Failure Threshold intervals:

Is a ping test better than the HTTP test?

Yes and no - ping tests are simpler and more straight forward than the HTTP test, but some network operators block ping requests. In both cases, you should select IP addresses that are external to your network but relatively close to you. As the number of network hops increases, the chances of encountering a bad or slow link increases. When that happens, NG Firewall may interpret it as a network problem and report one of your WAN connections as failing.

I only have one internet connection. Why would I want WAN Failover?

With a single WAN connection, its obvious that you have no alternative if your internet connection fails. You can still monitor the uptime of your ISP with WAN Failover by defining a rule that will log service interruptions. If downtime is hurting you financially, WAN Failover can help you document it rather inexpensively.