Bandwidth Control gives you the power to monitor and control bandwidth usage on your network. It can be used to ensure that your network continues to operate smoothly and that bandwidth is shared optimally based on what is important to you. Many organizations struggle with bandwidth problems such as students watching online videos or clients using BitTorrent while more important tasks struggle to complete for bandwidth. You can use Bandwidth Control to do things like give high priority to Video Chat or slow down all traffic coming out of machines using BitTorrent.

This section reviews the different settings and configuration options available for Bandwidth Control.

This displays the current status and some statistics. 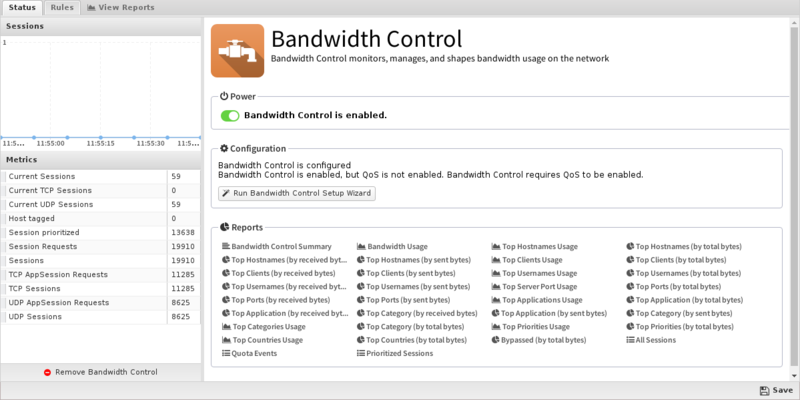 The setup wizard configures the initial configuration of Bandwidth Control - please pay attention to the prompts as they provide valuable information on how the application works and the answers to your questions will determine the configuration.

This is the most important setting in the configuration of Bandwidth Control. If you are unsure it is recommended to run some bandwidth tests when there is no other activity to determine the true download and upload rates of your WAN connection. Entering a value around 95%-100% of the measured value is typically ideal. If the value is too low, Bandwidth Control will unnecessarily limit bandwidth to the value you have entered. If the value is too high, Bandwidth Control will be less effective as it will over-allocate bandwidth and lose some ability to differentiate by priority. You will be asked to repeat this process for each WAN interface.

Each configuration's goals are described as well as what is prioritized and deprioritized. These rules can be customized later - this is just a starting configuration.

Most sites will not need quotas, however quotas can be extremely useful in some scenarios to prevent users from monopolizing resources. To enable quotas, click on Enable and provide information that best suites your organization.

More information on Quotas and how they work can be found in the Quotas section.

The rules tab contains most of the configuration and settings controlling the behavior of Bandwidth Control. Rules determine the action that will be taken when traffic passes through Bandwidth Control. For each session the rules are evaluated in order until the first match is found, then the action associated with the matching rule is performed and the data chunk is sent on its way. If no rule is found the no action is taken. If the session has been given no priority it is given the default QoS priority, which is normally Medium.

Note: Unlike most Rules in other apps, the rules in Bandwidth Control are consulted not only when the session is formed but also again on the first ten packets because some matchers such as "HTTP: Hostname" or "Application Control: Application" are not known until several packets into the session. Also, all of a host's sessions will be reevaluated when they are added/removed to the penalty box or when a quota is exceeded so active sessions will be reprioritized accordingly.

Extensive rule sets can be created (and imported and exported) that carefully assign the correct priorities to the desired traffic and perform the desired actions at the desired times.

The Rules documentation describes how rules work and how they are configured. 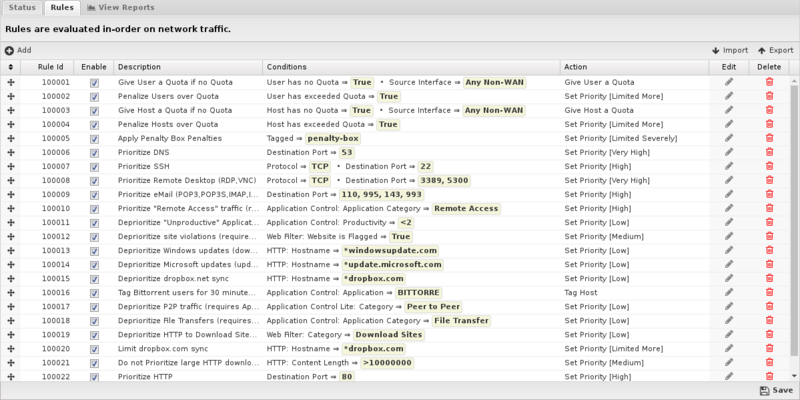 The overall effect of Bandwidth Control is to map traffic to priorities which are enforced by the QoS engine. There are 7 Priorities: Very High, High, Medium, Low, Limited, Limited More, and Limited Severely.

The other three - Limited, Limited More, and Limited Severely - are different in that they will never use all available bandwidth. The classes are punitive because they will limit bandwidth to a percentage of the whole even if there is more available.

To read much more in depth about the effects of prioritization and how bandwidth allotment works, see QoS.

A fundamental principle is that limiting traffic to a fixed low rate enforcement is almost never the right thing to do because wasted bandwidth is irrecoverable. In cases where the desire is to starve less important traffic it should be assigned a lesser priority (medium or low) so that it can still consume all bandwidth if no more important tasks are available. This means the less important task will finish quicker so that later these resources are free and this occurs definitionally at no expense to higher priority traffic, ever.

The priorites that limit to less than 100% even when the bandwidth is unused (Limited, Limited More, and Limited Severely by default) are useful for punitive situations.

Quotas are set amounts of data that can be used over a certain amount of time. This is useful for sites where you want to punish excessive usage. For example, in a hotel we want each IP to get 1 GB a day, but if this amount is exceeded it will be considered excessive and that host can be treated differently (be blocked, receive less bandwidth, etc). By using quotas and rules, bandwidth abusers are handled automatically requiring no administrator intervention.

Quotas can be assigned to Users or Hosts and the current quota status can be viewed by clicking on Users or Hosts accordingly. All sessions' data passing through NG Firewall gets counted against the corresponding Host or User.

The Reports tab provides a view of all reports and events for all traffic handled by Bandwidth Control.

Why are the rules evaluated on the first ten packets of a session?

Often rules involve session "meta-data" conditions such as HTTP: Hostname or Application Control: Application. These meta-data tags are usually completed fairly quickly (first few packets) but they are usually not known until the first few packets. As such the session is evaluated initially and the next 9 packets. This is to ensure that all rules that involve meta-data have a chance to fire. After the first ten packets the meta-data typically does not change and the rules are no longer consulted.

Dropping a Quota does not seem to work. Why?

If you have a rule set to give quotas automatically if a host doesn't have a quota it is probably being given a new quota again very quickly which gives the appearance that you can't delete the quota.

I added a rule to add quotas and the quotas are constantly being refilled and/or full. Why?

Rules are evaluated in order. The action for the first matching rule is taken.

Usually, when creating a rule you want to specify your conditions like "Source Address" = "192.168.1.100" AND "Client has no Quota" is True. With the second condition this rule matches on the first session of 192.168.1.100 and immediately given a quota. The next time the rules are evaluated this rule will not match because of the "Client does not have quota" condition fails, and the rest of the rules are evaluated normally.

I added a rule to add a client to the penalty box, and now the client is exempt from all prioritization rules. Why?

The same reason as the above FAQ. Rules are evaluated in order. The action for the first matching rule is taken.

If you create a rule at the top that says if "Source Address" = "192.168.1.100" then "Send Client to Penalty Box" then every time the rule is evaluated on traffic from 192.168.1.100 it will be sent to the penalty box and no further rules are evaluated. This effectively exempts 192.168.1.100 from all rules that follow because Rules are evaluated in order. The action for the first matching rule is taken.

Usually, when creating a penalty box rule you want to specify your conditions like "Source Address" = "192.168.1.100" AND "Client is in Penalty Box" is NOT True. With the second condition this rule matches on the first session of 192.168.1.100, which is immediately put in the penalty box. The next time the rules are evaluated this rule will not match because of the "Client is in Penalty Box" is true and the condition specified it should be NOT true. At this point the rest of the rules are evaluated normally, except 192.168.1.100 is in the penalty box as expected.